You might think that when you have finally cracked the problem of getting your child to sleep through the night that your sleep problems are behind you. Not necessarily! Unfortunately, Sleeping through the night is often just the start when it comes to the sleep problems that your child might encounter. In this article we will take a look at some of the most common sleep disorders that can occur in children, and we’ll talk about how they could be tackled.

It is important to ensure that your baby or child is getting enough good quality sleep at night so that they wake up refreshed and ready for the day ahead. In our post “How much sleep do I need” we looked at the amount of sleep needed. This ranges from 14-15 hours a day for babies, up to 12 months of age to 8-9 hours a day for children aged 12-18.

The sleep issues that can affect your child can be broken down into two very distinct categories. The first is dyssomnias which include the following:

The second Parasomnias, are sleep disorders such as:

Other sleep problems in children

When it comes to sleep, there are a significant number of sleep problems that your children may struggle with. Your child will probably not encounter many of the sleep issues listed above – nightmares and night terrors are probably the most common. They may, however, have some episodes of insomnia at some point in their life. This can happen when they are going through a developmental leap and are learning a significant amount of new skills, for example, as you progress with potty training, you may also have episodes of bedwetting.

If you are concerned about any sleep issue your child has it can be a good idea to speak to your GP. 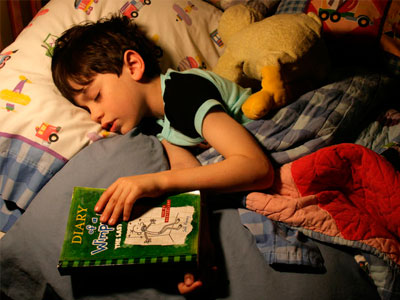